How to Catch a Queen: Runaway Royals (Mass Market) 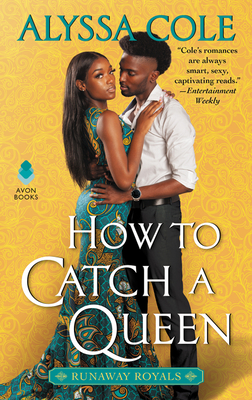 How to Catch a Queen: Runaway Royals (Mass Market)

This is book number 1 in the Runaway Royals series.

“In a time when Black kings and queens are a much-need balm to a seeming overflow of anti-Black sentiment, I fell in love with Shanti and Sanyu. Bogged down by tradition, ritual, and grief, Sanyu is trapped in a well of unrealistic expectations. Shanti, a queen searching for her kingdom, is the self-assured heroine we all look for and want to be. This story of their partnership turned love affair is filled with forbidden heat and flames, as well as the promise of a better tomorrow. Complex characters for complex times. I loved it.”
— Keiana Mayfield, East City Bookshop, Washington, DC

An arranged marriage leads to unexpected desire, in the first book of Alyssa Cole’s

When Shanti Mohapi weds the king of Njaza, her dream of becoming a queen finally comes true. But it’s nothing like she imagined. Shanti and her husband may share an immediate and powerful attraction, but her subjects see her as an outsider, and everything she was taught about being the perfect wife goes disastrously wrong.

A king must rule with an iron fist, and newly crowned King Sanyu was born perfectly fitted for the gauntlet, even if he wishes he weren’t. He agrees to take a wife as is required of him, though he doesn’t expect to actually fall in love. Even more vexing? His beguiling new queen seems to have the answers to his country’s problems—except no one will listen to her.

By day, they lead separate lives. By night, she wears the crown, and he bows to her demands in matters of politics and passion. When turmoil erupts in their kingdom and their marriage, Shanti goes on the run, and Sanyu must learn whether he has what it takes both to lead his people and to catch his queen.

Alyssa Cole is an award-winning author of historical, contemporary, and sci-fi romance. Her contemporary rom-com A Princess in Theory was one of the New York Times’ 100 Notable Books of 2018, and her books have received critical acclaim from Library Journal, BuzzFeed, Kirkus, Booklist, Jezebel, Vulture, Book Riot, Entertainment Weekly, and various other outlets. When she’s not working, she can usually be found watching anime or wrangling her many pets.

"Cole launches the “Runaway Royals” series with a bang, introducing a sexy but shy king, a determined and caring queen, and a host of characters who leap off the page into the reader’s imagination. Fans of the “Reluctant Royals” series will adore cameos by some of their favorites, but this is a solid starting point for new readers." — Library Journal (starred review)

"Cole subverts both expectations and gender roles with the smart, sexy contemporary romance that opens her Runaway Royals series... Their unlikely arranged marriage strikes a delicate balance of politics and passion that is sure to delight." — Publishers Weekly (Best Books of 2020)

“How to Catch a Queen is a cracking good tale. Cole’s worldbuilding is, as always, perfection, helped along by some engaging characters... one of the best romances of the year." — All About Romance