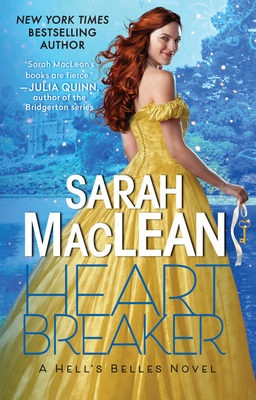 A Princess of Thieves

Raised among London’s most notorious criminals, a twist of fate landed Adelaide Frampton in the bright ballrooms of Mayfair, where she masquerades as a quiet wallflower—so plain and unassuming that no one realizes she’s the Matchbreaker…using her superior skills as a thief to help brides avoid the altar.

A King of Reputation

Henry, Duke of Clayborn, has spent a lifetime living in perfection. He has no time for the salacious gossip that arises every time the Matchbreaker ends another groom. His own reputation is impeccable—and the last thing he needs is a frustrating, fascinating woman discovering the truth of his past, or the secrets he holds close.

When the two find themselves on a breakneck journey across Britain to stop a wedding, it’s impossible for Clayborn to resist this woman who both frustrates and fascinates him. But late-night carriage rides make for delicious danger…and soon Adelaide is uncovering Clayborn’s truths, throwing his well-laid plans into chaos…and threatening to steal his heavily guarded heart.

A life-long romance reader, Sarah MacLean wrote her first romance novel on a dare, and never looked back. She is the New York Times and USA Today bestselling author of romances translated into more than twenty languages, a romance columnist, and the co-host of the weekly romance novel podcast, Fated Mates. A graduate of Smith College and Harvard University, she lives in New York City.

“Get ready for regency romance and badassery! MacLean returns to England, and this time pairs up an unlikely couple: a secret thief masquerading as a wallflower and a spoiled duke. Hijinks and heat ensue as they race across Britain to stop a wedding.” — Book Riot

“Bestselling author Sarah MacLean's Regency romance novels are always worth getting excited about, and Heartbreaker is no different.” — Popsugar

"...filled with intimate thoughts, delicious yearning, and many sighworthy romantic moments... Subplots regarding the Hell’s Belles’ clients and targets add great tension to the book, while the women’s friendship brings levity and humor. But it’s the quiet, vulnerable moments between the central couple, who embrace each other as true equals, that will ensnare reader’s hearts. Sublimely sensual and passionate.” — Kirkus Reviews