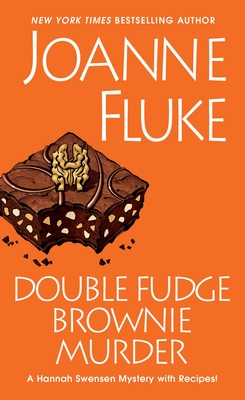 This is book number 18 in the A Hannah Swensen Mystery series.

Life in tiny Lake Eden, Minnesota, is usually pleasantly uneventful. But with the upcoming trial for her involvement in a tragic accident, Hannah Swensen hardly has time to think about her bakery--let alone the town's most recent murder. . .

Hannah is eager to clear her name once and for all, but her troubles only double when she finds the judge bludgeoned to death with his own gavel--and Hannah is the number one suspect. Now on trial in the court of public opinion, she sets out in search of the culprit and discovers that the judge made more than a few enemies during his career. With time running out, Hannah will have to whip up her most clever recipe yet to find a killer more elusive than the perfect brownie. . .

Features over a dozen Cookie and Dessert Recipes from The Cookie Jar!
Like Hannah Swensen, Joanne Fluke was born and raised in a small town in rural Minnesota, but now lives in sunny Southern California. She is currently working on her next Hannah Swensen mystery and readers are welcome to contact her at the following e-mail address, Gr8Clues@JoanneFluke.com, or by visiting her website at www.JoanneFluke.com.
Indulge In Joanne Fluke's Criminally Delicious Hannah Swensen Mysteries! Blackberry

"Witty.  .  .tempting recipes at the end of most chapters, including one for fresh blackberry cookies, will appeal to anyone who loves to bake." --Publishers Weekly

"Fluke offers a new twist to the series.  .  .the cookie-shop owner's character gains depth. . .but there's still room for recipes and for Hannah to move toward an overdue decision on the question of which of her two boyfriends she prefers. Readers will be eager for the next installment." --Booklist

"Culinary cozies don't get any tastier than this winning series." --Library Journal"If your reading habits alternate between curling up with a good mystery or with a good cookbook, you ought to know about Joanne Fluke." --The Charlotte Observer

"Fans of this wildly popular series will not be disappointed. Fluke has kept this series strong for a long time, and there is still plenty to enjoy for foodie crime fans." --Booklist